This is our general blog which will have all the latest news. If you’re interested in the scientific blog or our research material you’ll find them under the tabs above. 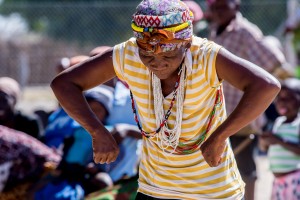 All of the performances focused on elephants or the experiences people have of living close to elephants. 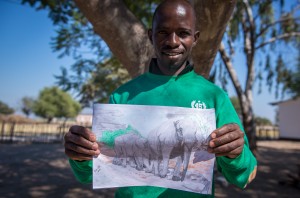 A winning art piece from the Village of Gunotsoga 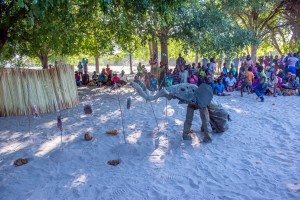 This drama was full of surprises, including this elephant character (amazing costume, made locally with only materials at hand … ). He alarmed with rumbles and trumpets as he smelled the chilli-soaked cloths protecting a farmer’s pretend field. The kids ran, screaming and laughing when he appeared! This was a winning performance from the Village of Eretsha. 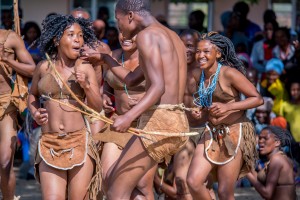 Spirited dancers from the Village of Tobera 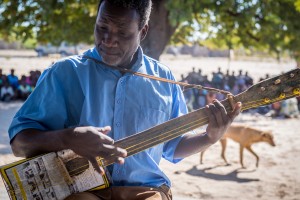 A winning performer from the Village of Mohembo East. This artist is blind and incredibly talented and creative. He fashioned this guitar from an old oil can and wire for strings! 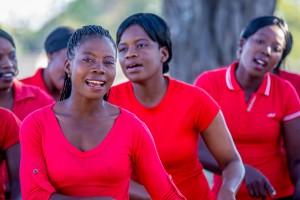 A choral group from the Village of Gunotsoga 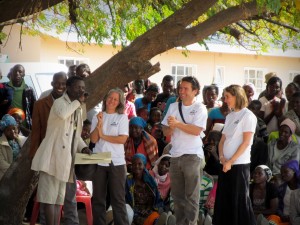 We awarded certificates and cash prizes for the winning performers from each of the 13 villages. Here are Ecoexist Directors, Dr. Amanda Stronza, Dr. Graham McCulloch, and Dr. Anna Catherine Songhurst, giving out the awards. Our Field Coordinator, Max Baitseng, emceed the event along with two of our Ecoexist Community Officers (ECOs), Tsalano and Mathata. 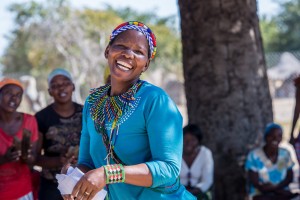 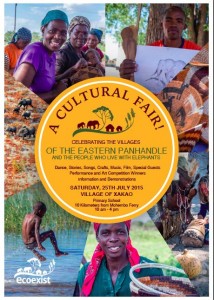 Our poster for the Cultural Fair

Hundreds of villagers, artists, performers, government leaders, tourists, and special guests gathered in the Village of Xakao in July this year for the first-ever Cultural Fair of the Eastern Okavango Panhandle. The Ecoexist Project, a non-profit organization working to reduce human-elephant conflict in the region, hosted the event. The Ecoexist team, comprising Ecoexist Community Officers (ECOs), Field Coordinators, interns, researchers and directors all worked hard as a team to make the Fair a success. Writer, storyteller, and founder of the Maun-based organization, Tharientsho Storytellers, Bonty Botumile, helped plan and coordinate the event.

The event featured performances focused on elephants and the experiences of people who live every day with elephants. Dr. Anna Songhurst, Director for Ecoexist said, “People in the Panhandle know first-hand the challenges of competing for space, food, and land with the world’s largest population of free-roaming elephants. We organized the Fair as a way to help build shared identity and more positive attitudes about elephants while encouraging new elephant-themed products and branding the Panhandle as an elephant-based destination.” The event was free and open to the public. The Ecoexist team plans to host the Fair again and is seeking a corporate donor to invest in making it annual event.

“Much of our work is about connecting science with policy to reduce human-elephant conflict,” said anthropologist and Ecoexist Director, Dr. Amanda Stronza, “and arts can be the best elixir. We are always seeking to share the voices of people who live with elephants, bringing attention to their struggles, and in that way also helping the plight of elephants. Nothing is more moving or compelling than art.” Leading up to the event, a team of judges from the Ecoexist Project selected winning performances in each village. “People came with the most astonishingly beautiful music, dance, drama, and poetry,” said Stronza.

“We organized the event as another way to provide a voice from the Okavango Panhandle, highlighting the need to address human-elephant conflict and the great strides Ecoexist and our partners are making to find strategies for long-term coexistence,” explained ecologist, long-time Botswana resident, and Ecoexist Director, Dr. Graham McCulloch.

The Fair also featured presentations throughout the day with a focus on various tools and strategies the Ecoexist team is using to reduce human-elephant conflict. Themes included how to make and burn chilli pepper briquetttes, how the Ecoexist researchers are tracking and monitoring collared elephants throughout the region, how the team is working with Botswana Land Board offices to demarcate elephant pathways on the ground, and how conservation agriculture is working as a method for boosting yields and increasing food security for local farmers.

Visitors to the Fair also had the chance to see and sample a variety of elephant-themed and elephant-friendly food and handicraft products. In collaboration with entrepreneurs, the Ecoexist team is facilitating the development of a line of “Elephant Economy” products that will be sourced locally and help generate benefits for people who live with elephants. The products include elephant-friendly farming and veld items (e.g. organic millet beer, marula jam, chilli sauce) and baskets and other curios with elephant designs.

Several times throughout the day, audiences watched the newly released Ecoexist documentary film, Pathways to Coexistence. Director and cameraman for the film, Richard Hughes, from the UK company, Edge to Edge Films, was present to answer questions from the audience. Multi-Emmy Award winning NBS broadcast journalist from Botswana, Leloba Seitshiro, narrated the film as a donation for Ecoexist, and she was also at the Fair. “I’m incredibly honored to be part of this film,” she said. “The film shows how conservation challenges can be resolved through simple ideas, preserving the unique beauty of Botswana, its people and its wildlife.” Special guests at the Cultural Fair also included local rap artist, Chris Manto 7.